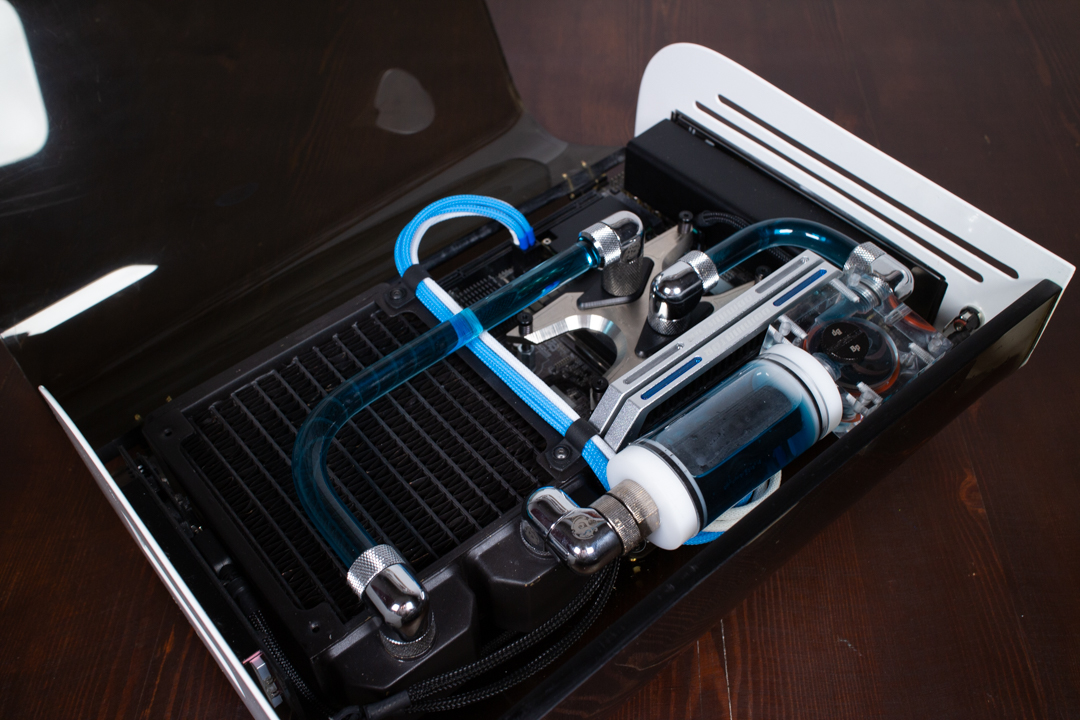 In the last update I finished up the AIO-version of CURV3D, I won the modding contest at Dreamhack and got home and started working on the next big thing. Which was removing the H75 and starting to figure out how to fit a custom-loop inside this small case.

The choice of radiator and CPU-block landed on EKWBs XT120 and MIPS Iceforce. The MIPS block was bought on my vacation to the US, picked it up straight from Performance PCs warehouse.

The choice of pump fell on the only thing that would fit, Alphacools DC-LT with their pumptop. To install this I made a small pump-mount that followed the curved acrylic piece, this was screwed to the bottom with dampening material between.

I also cut out piece of aluminium to make a IO-cover for the motherboard, you can find a guide on how to do that here. To cover some parts of the motherboard and mSATA SSD some aluminium was cut out aswell and all was painted black. The 2.5″ SSD that was mounted on top of the radiator was removed after I got OS to boot from the mSATA one. Nice to get rid of some cables.

First I was thinking about going for a loop without a reservoir, but while discussing it with my friend Laine we decided to measure out and make a custom reservoir for it, I started measuring and he built this beautiful little thing on his lathe.

This and Bitspower fittings was the last things needed to start to plan out the loop. The reservoir was installed straight to the side intake of the pumptop, the other end of the reservoir routed to the radiator.

After the 2.5″ SSD was removed the loop was pretty straightforward, only two tubes was needed as everything else was installed with fittings. I routed the loop so that the two tubes would kind of have the same kind of curves as the case itself.

The loop was then pressuretested and filled up and dyed blue. After that the build itself was done. It only took 9 years….

I installed Windows and setup all the drivers and other softwares for LCD etc, in the next and last part I go through this build from the beginning 9 years ago up until the final result.

I think it is time for another update! Lots have happened, both good and bad.…

I am always working on more than one project at a time, SAIL is a…